Despite all the busy-ness these last two weeks before opening for the season bring, I made a point to soak up some sun and enjoy this fine spring day on the first of May. Some day I will post my recipe and method for sima [lemon mead] and I might even make some tippaleipä [funnel cakes] in a timely fashion, but no bonfires or labor marches for me this year. Just a moment of thankfulness for the cherry blossoms of spring. 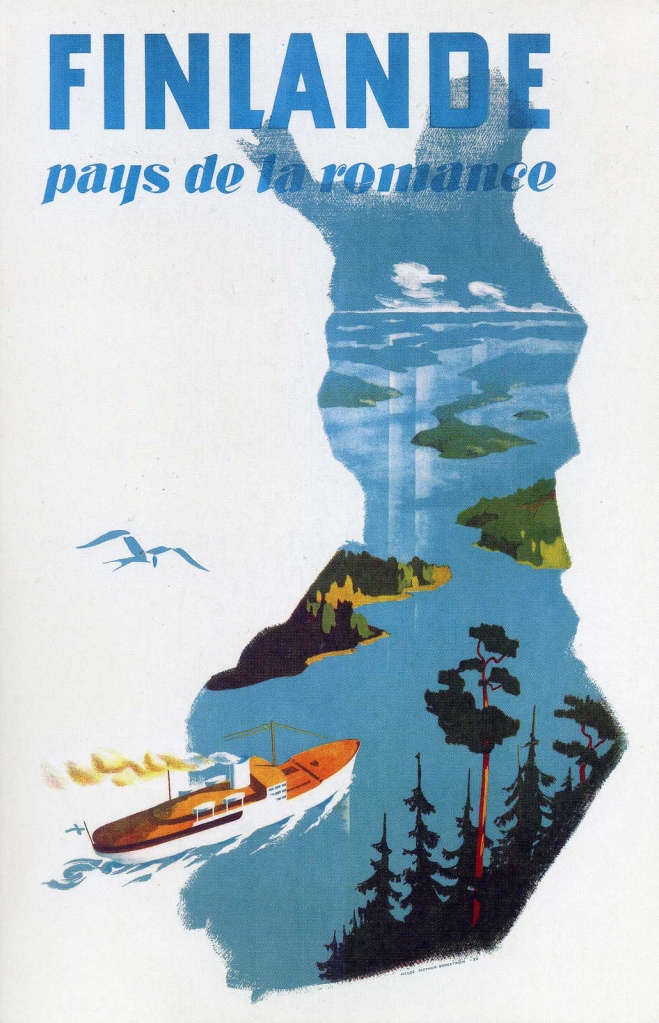 For some reason, the above image (and a flamingo chair) have been my most repinned on Pinterest.

The chair I get, I think, but the travel poster from 1950 is more interesting on many levels. Besides being well done, it evokes an idyllic scene that is recognizably Finnish in nature. Of course, the “country of romance” subtitle might get a few snickers from Finns. We’re not inherently known for being romantic at least in the relationship since of the word.

If you follow the poster link, there’s an early music video of Tapio Rautavaara singing a romantic song. Tapsa lip syncs the words and the woman mostly sits there feigning interest and appearing uncomfortable. Of course, this is just bad acting, but in a way, it portrays the stereotype of taciturn reserve.

Are Finns as reserved as they are portrayed? Not really. The joke is that a Finnish man only tells his wife that he loves her on their wedding day. If that were really true, there’d probably be a lot less Finns around. My boyfriend likes to joke, “Two Finns walk into a bar. Nothing happens.”

There are things that Finns are “romantic” about, however. They can wax poetic about the beauty of the forests and lakes of Finland, snow, rye bread, kaamos [polar night], the Winter War, sauna, and Finnish sisu. Often Finns abroad in particular have a wistfulness or at least take a certain pride in all things Finnish. It’s not limited to us though.

Do these things make Finland unique? Certainly. Does being a small, relatively isolated, homogenous population have anything to do with it? Possibly. It makes things easier to study and catalog for starters.

So what is it about Finland?